Welland – CAMI International Poultry Inc. is being squeezed out of business by the no-trade deal recently made between Ontario and Quebec chicken marketing boards, processors and government supervisory agencies.

CAMI International Poulty Inc. will lose an average of 850,000 kilograms of live chicken as a result of the deal.

It’s the only Ontario company being squeezed this way; two others have been granted concessions by a committee chaired by the Ontario Farm Products Marketing Commission and involving the Chicken Farmers of Ontario marketing board and the Association of Ontario Chicken Processors. Some say they were "bought off".

The committee excluded the Ontario Independent Poultry Processors association in which CAMI International is a member.

The chicken board and processors both termed the association and its general manager, John Slot, “disruptive” during a commission hearing last winter when the OIPP sought inclusion in the Ontario Chicken Industry Advisory Committee. The small guys and Slot were denied.


It is clear to me that the chicken industry in Ontario is no longer run by the farmers it was intended to serve, but by the Association of Ontario Chicken Processors.


And it's also clear that they not only want to get rid of troublesome competition from the likes of CAMI International Poultry Inc., but also to reduce their costs of buying chicken from farmers. 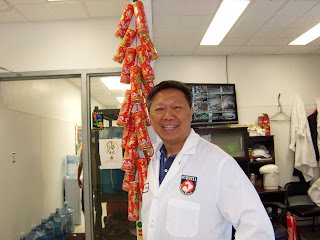 “I don’t know why,” Jimmy Lee, one of two partners who own CAMI, said about his failure to persuade the industry to keep his plant supplied.

He was, in fact, born in Trinidad and immigrated at a young age and helped his father, Johnson Lee, develop a chicken-processing business from scratch, starting by slaughtering live birds for Chinese clients at the Kensington Market in Toronto.

Johnson developed that into a thriving business, Lee’s Poultry, and sold it to Sargent Farms in Milton in 1995.

Jimmy worked for Sargent Farms for five years and then, recognizing a demand for Hong Kong style fresh chicken, decided to launch CAMI International in Welland.

He and two partners took advantage of the chicken board’s new entrant program for processors and obtained 250,000 kilograms of supply per six-week quota period. It took two years to build the 25,000-square-foot plant which opened in 2005.

Demand proved so strong, especially from the Chinese community in the Greater Toronto Area, that Lee was unable to get enough birds in Ontario, so he began contracting with Quebec producers. And offering premiums to persuade them to move from their Quebec processors to CAMI.

He was not alone and soon the Ontario demand for Quebec birds left Quebec processors short and they began buying Ontario-grown birds, in both cases offering premiums to farmers to get them to switch from their home-province processors. Eventually 10 per cent of production in each province was going to processors in the other province, and at substantial premiums to the price the supply-management marketing-board system can justify.

The marketing boards in Ontario and Quebec put a lid on that cross-border trade, declaring a moratorium to prevent any increases in out-of-province contracting.

That moratorium was eventually thrown out by a Quebec court last winter, but by then the two provincial marketing boards, processor associations and provincial supervisory agencies had agreed in principle to stop all cross-border trade in live birds.

That deal is due to take effect this fall which is when CAMI will no longer be able to buy birds from its loyal producers in Quebec.


It's hard to imagine that the courts will uphold this new deal if anybody has the courage and resources to file a challenge. It is, after all, a flagrant breach of an agreement premiers reached to reduce and eventually eliminate inter-provincial trade barriers.

The partners involved in the Ontario part of the trade deal have refused to grant Lee and his CAMI business any replacement birds from Ontario production. All of the other processors who were buying Quebec birds are getting replacements from Ontario.

This deal is doubly unfair because there are more birds being produced in Ontario than the large-volume processors want.

Every quota period they have argued that Ontario needs only the “base” allocation the national agency assigns, and they don’t want any additional “market development” allocation.

The Ontario chicken board has, however, been routinely requesting - and has been granted - two per cent more for market development. But it assigns that extra quota on a pro rata basis, meaning every processor gets two per cent more.

That means the processors who said they don't want these extra birds are getting them, yet they won’t yield those birds to CAMI.

There are about 1.4 million kilograms of market development allocated to Ontario every quota period, more than enough to satisfy Lee’s request for 850,000 kilograms per quota period.

Lee is frustrated because he points out that “I played by the rules. I did nothing illegal” in signing up Quebec producers to fill the demand from his eager customers.

Were it not for marketing board and other restrictions that make it virtually impossible to innovate in the chicken industry in Ontario, CAMI would be exploring market opportunities in other countries, including China.

While the federal and provincial governments routinely hand out grants to other companies to generate more jobs – eg. $19 million for Dr. Oetker to build a $113-million frozen pizza plant at London, Ont. – Lee finds it unfair that neither federal nor provincial politicians or bureaucrats have been willing to lift a finger to save 60 to 65 jobs at CAMI.

Lee said he never took any government loans or grants to build his plant.

Cericola Farms faced a similar fate, but left the Ontario Independent Poultry Processors association on the eve of the association’s appeal to the commission, then hired a lawyer and threatened the chicken industry with court challenges and was subsequently satisfied with more birds from Ontario farms to offset its loss of Quebec birds. Cericola Farms also joined the big processors as a member of the Association of Ontario Chicken Processors.

Robert LaPlante, a small-scale processor in the Ottawa Valley, also threatened to raise a ruckus. He filed an appeal to the Ontario Agriculture, Food and Rural Affairs Appeal Tribunal, but dropped that appeal when he was offered a deal.

Only CAMI has been left out. Slot thinks it may be retaliation for his aggressive pursuit of fair dealing for the small-scale processors.

"They don't like me," Slot says, although he insists that he has always worked hard to be a team player and to negotiate workable deals for the chicken industry.

During the commission hearing, he was able to demonstrate that far from being a disruptive force, he was co-operating with the chicken board to come up with a new system for sharing scarce chicken supplies among processors. He and the chicken board worked out a satisfactory proposal, but it was the Association of Ontario Chicken Processors that refused to negotiate.

After that the Ontario Farm Products Marketing Commission, the government-appointed supervisory body for marketing boards, muscled the big processors to negotiate via an Ontario Chicken Industry Advisory Committee.

The commission provided a couple of members and the committee chairman, Elmer Buchanan, vice-chairman of the commission and a former Ontario agriculture minister under the NDP Bob Rae government.

That committee struck the new deal on sharing Ontario’s chicken supplies, but won't reveal details. The chicken board has not returned calls asking for a briefing and the Ontario Farm Products Marketing Commission has refused to provide a copy of the committee’s proposals and agreement, if there is a written one.

I have filed an application under Freedom-of-Information legislation, but the agriculture ministry says it needs more than the usual 60 days to process that request. Maybe they have to hunt really hard to find copies.

Recall that the small processors’ association has been excluded from this committee, so they have no voice in the negotiations for chicken supplies.

Lee said what’s being done is an infringement of his constitutional rights and a violation of the federal Competition Act, but he hasn’t got the time and money to hire lawyers to fight for survival via appeals and court challenges.


I think he's also too much of a nice guy, trusting that truth, honesty and fairness will prevail. That has never worked before with industry bullies such as Maple Lodge Farms Ltd. and Maple Leaf Poultry Inc., which dominate the Association of Ontario Chicken Processors. Or the marketing board.

He says the Ontario poultry-industry club is using the excuse that he sold 150,000 of the 250,000 kilograms of Ontario chicken supply he was granted under the new entrant program. He has explained that he and his remaining partner sold their rights to 150,000 kilograms only because they needed cash to buy out the third partner, John Vanderzanden.


It is, in other words, the flimsiest of excuses for running a successful company out of business, leaving hundreds of thousands of ethnic Chinese consumers without a supply of their favourite style of chicken.

Slot said he’s determined to fight for CAMI’s survival. “Just wait and see what I’m going to do. You’re going to be surprised.”


Slot, who is a former chairman of the Ontario chicken board, doesn't scare easily.