Olymel strike is over 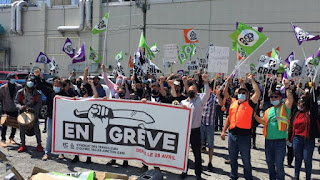 The work force of about 1,000 has voted 72 per cent in favour of accepting a six-year contract at the Olymel pork-packing plant at Vallée-Jonction, Quebec.

That brings to end a strike that began in late April and left hog farmers scrambling to find a home for market-ready hogs. Some went as far as Alberta, others to the U.S. and thousands were euthanized.

The company said it hopes to have slaughter operations ready to resume on Friday.

Olymel had said it would cancel a second shift and lay off about 500 workers, but now said those plans have been cancelled.

The new contract includes an immediate pay increase of 10 per cent and a total increase of 26.4 per cent over the six-year period.

The plant has capacity to slaughter about 35,000 hogs per week.