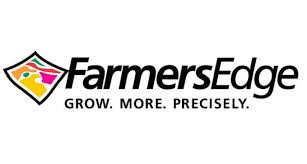 Fairfax Financial made deals prior to the public offering which give it 61.5 per cent ownership of Farmers Edge.

Chief financial officer David Patrick said there was demand for eight to nine times as many shares as on offer Wednesday.

Farmers Edge directors, officers and employees took about $500,000 worth of shares.

The company said “Our platform, Farm Command, leverages multiple data sources, including from our proprietary devices, to provide farmers with real-time, acre-by-acre analytics, as well as predictive yield modeling and specific alerts with recommendations.

“These insights have been made possible with the utilization of artificial intelligence and machine learning which we have used to develop our products since 2015.

“Our Smart Claim software allows insurance companies to access our data to enhance policies and reduce claims management costs, and features in Farm Command assist our growers in maximizing the carbon-capture and reduction capabilities of their acres by providing the verifiable data required by the carbon offset industry. We employ approximately 500 individuals across six countries.”

Patrick said now that the platform is built, there is relatively little cost to scaling up business in the six countries where it operates. Canada and the United States remain its primary focus and Brazil was the third Patrick mentioned in a ZOOM meeting.

Europe is another area which has also brought in partners, such as seed companies which enlist their farmer-clients.

Chief executive officer and co-founder Wade Barnes, who grew up on a farm in Manitoba, said insurance companies hold promise because they insure about 430,000 acres in Canada and the U.S., they have agents that can market Farmers Edge and they can benefit from the data collected so they can improve the policies they offer.

Patrick said the company aims to increase acreage covered from about 17 million last year to about 40 million in a couple of years. Coverage doubled last year.

The company also signed on with a new company to provide imaging – i.e. satellite “pictures” of field and crop conditions - and he said that has improved quality and reduced costs.

Patrick ducked a question about when he expects the company will turn a profit.

Wade said much of the money raised from the sale of shares will be used to market its services to farmers. They have made partnerships with input suppliers, such as seed companies, who help cover the cost of giving new clients one year of free service under the Progressive Grower program.

They hope those farmers will then sign up to buy the service on an ongoing basis.

They said Bayer and John Deere are their main competitors, but said because they are the only fully independent company offering these services, farmers are free to shop for any suppliers.

Some of the risks for investors listed in the company’s stock-market prospectus are:

“We have a history of negative cash flows from operating activities and losses and we may be unable to achieve profitability;

“The Fairfax Shareholders will continue to have significant influence over us after the Offering.

“Our sales cycles can be unpredictable, and our sales efforts require considerable time and expense. As a result, the timing of our revenue and collections are difficult to predict and may vary substantially from period to period, which may cause our results of operations to fluctuate significantly.”

It also notes that farming is highly dependent on the weather which is sometimes adverse.

No shares can trade on U.S. exchanges because the company is not registered there.