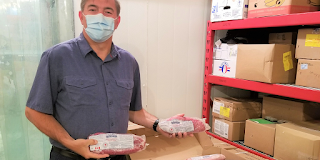 Pork producers in Peterborough-Kawartha have stepped up with a $2,500 donation to the local food bank, matched by the Ontario Pork marketing board with additional support from Conestoga Meats of Breslau.

The donations will go to replace food lost during the May 21 storm that knocked out electricity needed to keep foods frozen or refrigerated.

Dave Malcolm, president of the local pork association, rallied fellow producers when the pork board put out the call after being contscted by Dave Smith, the local member of the legislature.

Almost 1,500 kilograms of Ontario-grown pork tenderloin was delivered to Kawartha Food Share on June 20 for distribution to the organization’s member agencies.

“In the aftermath of a devastating storm that forced food banks across our community to throw out stores of produce and meat, local farmers stepped up – despite damage to their own farms,” said Smith.

“Their generosity shows us once again that our hardworking farmers are responsible and devoted members of our community. I cannot thank them enough,” he said.

While people and animals were safe, several buildings were heavily damaged and farm operations had to rely on generators for several days.

Despite this, Malcolm and his fellow farmers stepped up to meet the need in their community.