A movie called “Cow” is going to premiere at the prestigious Cannes film festival this year.

It is directed by Oscar-winning English filmmaker Andrea Arnold who has spent seven years making the film that views the world through a cow’s eyes. 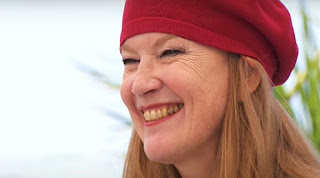 ‘Cow’ is Arnold’s first-ever non-fiction film. It focuses on a single cow on a farm and follows its life cycle, watching it in a detached yet empathetic manner as it does its primary job – producing milk and calves- when she is not out to pasture.

Arnold said “this is the story of a reality, that of a dairy cow, and a tribute to the immense service she renders us. When I look at Luma, our cow, I see the whole world through her.”

“We usually see cows as a herd. I wanted to see a cow as an individual,” she said.

“Cow’ is an attempt to dispel the romanticised notion of nature that the world has. I wondered what is the reality It is a reaction to the disconnection from reality that we are all facing now,” she said.

“We are sort of frightened of reality. I wanted to get in there and see what it is actually like The idea is to get people to engage with a non-human consciousness.”