A bridge between Tennessee and Arkansas has developed a large crack, prompting officials to close the Mississippi River to barge traffic.

Already 700 are stalled, about 80 per cent of them carrying corn. 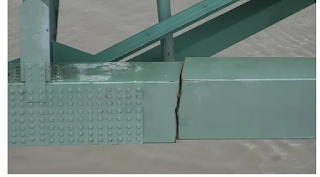 It could be two months before the river reopens to barge traffic.

There is a possibility that tugs could allowed to move them safely under the bridge. The concern is that a barge might hit one of the piers and the weakened bridge would collapse.