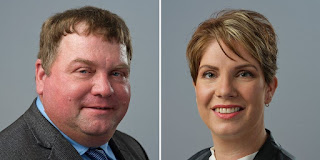 John de Bruyn has been re-elected chairman of the Ontario Pork marketing board. He has been chair since 2021.

Maike Campbell is the new vice-chair.

De Bruyn farms in Oxford County, Campbell in Lambton. Both were acclaimed in elections Tuesday.

Perth County producer Doug Ahrens completed his term on March 23 after serving as a director for 13 years.

Tanya Terpstra, a pork producer and delegate from Perth County was acclaimed as a new board member representing Zone 2.