Ron Plain, extension specialist at the University of Missouri, questions whether the pork industry can deliver all of the pork retailers say they want from farms that won’t be using gestation crates for sows. 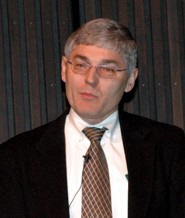 The list of large-volume retailers has ballooned this spring, but a survey of hog producers indicates their plans for penning sows will fall short of the retailers’ commitments.
Plain notes that a survey of hog operations with more than 1,000 sows revealed that only 17 per cent have loose housing. And he notes that may be for only some, not all, of their sows.
And the same survey indicates that the percentage who will be penning sows two years from now is only 23.
Plain said one of the implications is that retailers who want pork from farms that don’t pen sows in stalls or crates during gestation will need to establish a verification system.
“That is something that's really not much of anything happening on,” Plain said in a recent interview with Farmscape.
“We find that a number of firms are implementing some open pen gestation but there's really not a tracking verification system in place to make sure that consumers are getting what some retailers are saying they're going to deliver,” he said.
“It's not good for retailers or for producers if we confuse customers or promise things that can't yet deliver,” he said.
by Jim Romahn