Agriculture Minister Gerry Ritz misled the Senate when he was introducing a bill to update food inspection and safety earlier this year.

He said several times that Canada compares favourably with other countries and at one point said we consistently get an A+ rating. 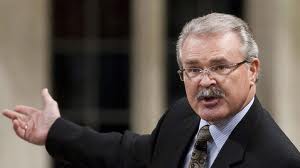 Our most important trading partner, the United States, doesn't use ratings, let alone handing out A+s.

I don’t have all of the other nations’ audit reports of Canada at my disposal, but I do have the audits done by the United States. Canada frankly rates poorly, judging by comments about critical deficiencies that need attention.

Even banana republics, such as Brazil, get better reviews from the American inspectors.

Unfortunately, the U.S. Department of Agriculture hasn’t posted its recent annual reports on Canada; the most recent one is for 2009.

It notes that conditions in three Canadian plants the U.S. auditors visited were so poor that they were banned from exporting to the United States. Three additional plants were deemed seriously deficient.

There is no indication that Canadian Food Inspection Agency executives from head office in Ottawa, who accompany American inspectors during these audits, disagreed with the findings.

There is also no indication that the Canadian plants were shut down until they could meet Canadian standards. They likely kept on grinding out food for an unsuspecting Canadian public.

That is, after all, the way it has been done for decades. I first found evidence of U.S. delisting of Canadian meat-packing plants in 1976, and those Canadian plants kept on marketing to Canadians while they were banned from the U.S. I see no evidence that matters have changed since then.

Ritz also did a tap-dance around $56 million worth of claimed “efficiencies” he intends to realize through this new legislation.

Some Senators quizzed him closely as to whether these are budget cuts, but Ritz insisted they are efficiency gains, not budget cuts.

He also revealed that the federal government took over meat inspection for a couple of Prairie provinces, but was getting paid only 17 cents on every $1 worth of costs. When he called for 100 cents on the dollar, the provinces dropped the feds like a hot potato and resumed their own meat inspection.

I guess A+ doesn't resonate with them.

And so much for a single standard of inspection across Canada. It doesn’t exist, and never has. As Canadians, we pay our taxes and take our chances.

Ritz said the new legislation will improve food safety across Canada. That is a matter of blind faith.

What improves food safety is food producers and processors committed to food safety, not a smug minister of agriculture making pompous claims in the Senate.
by Jim Romahn