The Grand River Conservation Authority is asking water-taking permit holders to cut back because river levels are low. That includes farmers who irrigate crops in an area generally south-east of Brantford.

More specifically, it is those who take water from Whitemans, McKenzie, Boston, Mount Pleasant, Horner and Kenny Creeks in Brant, Oxford and Norfolk Counties, the Six Nations reserve, New Credit and Haldimand.

Whitemans Creek has been in a Level 2 condition since Thursday, July 7.

McKenzie Creek has now also been moved to a Level 2.

Level 2 triggers a request to voluntarily cut back water use. The next step is to require conservation measures.

The rest of the Grand River watershed remains in a Level 1 condition. 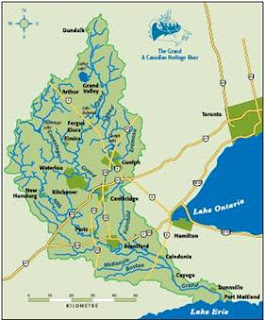 The request comes from the Grand River Low Water Response Team, which has noted water levels in the McKenzie and Whitemans Creek sub-watersheds have dropped to below half of the average summer flow.

In addition, the Ministry of Natural Resources and Forestry is asking anglers to refrain from fishing in Whitemans Creek, which is an important trout habitat. Low water levels and warm water temperatures can put the fish population under stress, which can be compounded by fishing.

While the watershed received some much-needed rain last week, the soil has been very dry and the rain that did fall absorbed quickly or ran off in the urban areas.

The southern part of the watershed continues to be particularly dry, and there is little rain in the forecast.

Flows are being maintained in the Grand and Speed Rivers from discharge from the large reservoirs.

Residents are being asked to not water lawns, even from private wells.

The aquifers that feed Whitemans and McKenzie creeks also feed many wells and dug ponds in the area. Water withdrawn from wells and ponds can reduce the amount of water that makes its way into the creek. Therefore, it is important that all water users help to conserve water.

For farmers, information on Water Shortages and Conservation is available in the Low Water Response section of the GRCA website, as well as suggested actions that other major water users can take to help conserve water.

Permits To Take Water are issued by the Ministry of the Environment and Climate Change (MOECC) to those who withdraw more than 50,000 litres a day of water from a watercourse, pond or well.

In the Whitemans Creek  and McKenzie Creek sub-watersheds, there are about 215 permit holders , most of them for irrigation.
by Jim Romahn