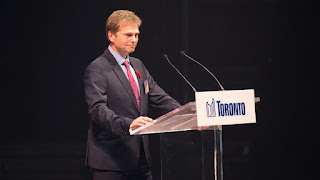 Michael Kraljavic of Toronto has been appointed to a one-year term as chairman of the Ontario Land Tribunal which replaced the Ontario Municipal Board in 2017.

Its highest profile is adjudicating appeals land developers file when municipalities reject their proposals, such as encroaching on prime farm land.

The Ford Conservative government has a track record of favouring development. That has brought criticism from the public and the agriculture community, most notably proposals for Highway 413 north of Toronto that would cross farmland and attract developers to propose urban development along the route.

Kraljavic is a real estate development professional and has been chairman of the Toronto Portlands Company which is a political appointment.
by Jim Romahn