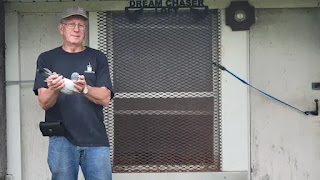 Keith Woods of Guelph holds one of his racing pigeons

An Ontario ban on racing pigeons because of avian influenza has been lifted.

The season, which typically runs May to September, was delayed after the Ontario Ministry of Agriculture, Food and Rural Affairs (OMAFRA) issued orders in April and May limiting the "commingling of birds from different locations," reported CBC Radio in Kitchener.

The Canadian Food Inspection Agency  reports that 1.9 million birds have died or been sacrificed because of the highly-deadly and contagious virus.

The ban was officially lifted on May 20, good news for racers such as 11-year-old Charlotte Cassell of Toronto whose pigeons, Lucifer and Tyler, came in second and third, respectively, in a race on opening weekend.